Why we should all buy Fairtrade bananas

Simple choices at the grocery store can make a big difference.

Equifruit President Jennie Coleman has been passionate about social justice and community development since her 20s, when she volunteered for two years on an initiative in Namibia.

That experience really showed me the power of development and how people work for themselves and their own community to make a great change,

she says. Now she heads up Equifruit, a company committed to making Fairtrade bananas more accessible in Canada.

Equifruit is changing the game for Fairtrade bananas

Equifruit is Canada’s leading Fairtrade-certified banana importer and diehard believers of ethical fruit. Though currently only serving Quebec and Ontario, they have their sights set on bringing Fairtrade bananas to the rest of the world by marketing to a key demographic – Millennials and Gen Z – with vibrant graphics and cheeky taglines like, “The only banana sharks eat” and “CEO of having standards.” Their campaigns are aimed at sparking discussions through humour in an effort to do good in the world and drive customer behaviour.

Fairtrade is an international certification system that aims to empower the farmers, producers, and agricultural workers that are the most marginalized in the global trade system. It ensures that a fair price is set for the commodity so that it is produced sustainably and ethically, meaning decent working conditions, no forced child labour, and sound environmental practices. “Fairtrade brings an ethical framework and community investment to business,” says Jennie about why she got into the business. “It allows for further community development through investments for schools and healthcare centres.

All about Fairtrade bananas

It’s bananas that one of the cheapest fruits in the grocery store comes at a heavy cost to people and the planet. According to Fairtrade Canada’s 2019 Behind the Peel Campaign, market pressure for competitive pricing – which can go as low as 20 cents a box for bananas – means growers must save in other areas. Often, this means cutting workers’ wages, limiting access to social security benefits and establishing harsh, unsustainable production methods that, although inexpensive, hurt the environment… Fairtrade certification addresses these issues by setting a price that reflects the protection of the people who produce the commodity, and the environment.

When it comes to Fairtrade bananas, Canada’s falling behind

Though Fairtrade fruit is becoming increasingly important, it’s underrepresented at Canadian grocery stores. According to Behind the Peel, “Canada is woefully behind in retailing bananas traded under fair terms. Where other countries see major retailers committing to 100% Fairtrade banana sourcing, in Canada, Fairtrade bananas are available in IGA and Rachelle-Béry in Quebec, and Farm Boy and Longo’s Markets in Ontario.” Since this campaign was published in 2019, more small grocers have brought Fairtrade to their shelves, but activists and consumers are urging for more.

In addition to securing a fair price per box of bananas, Equifruit’s Fairtrade program pays a social premium of $1 US dollar per 40-pound box. “This may not sound like much,” says Jennie, “but at the volume we sell, it’s substantial.” For example, in its last fiscal year, Sobeys purchased 135,000 cases of Fairtrade bananas. That equates to $135,000 US dollars capital to making improvements in banana-producing communities, like those in Ecuador. To the consumer? It’s not a huge spend, with certified-Fairtrade bananas fluctuating around 50 cents each and $2.99 per bunch, which is a small price to pay for peace of mind that your piece of fruit isn’t harmful to people or the environment.

Fairtrade brings an ethical framework and community investment to business.

How do Fairtrade bananas make a difference?

With all the additional capital, members of a farming cooperative – farmers, producers, and workers – can vote on how the money is spent. One cooperative recently invested these funds on improving the irrigation system of their plantations. “It might not sound that exciting, but it makes a huge difference,” says Jennie, explaining that climate change has triggered heavier rains, resulting in ruined crops and a significant loss of plant productivity. Better irrigation protects the crops, leaving their yield – and profits – less susceptible to inclement weather, and this additional economic security has a ripple effect to the whole community.

The moment Jennie Coleman knew she was making a difference

Prior to the pandemic, Jennie visited an Ecuadorian community development project that moved her to her core. With the investments made from being part of Equifruit and Fairtrade, the community was able to build for children living with disabilities. “In the schools we visited, the mothers were there, too, because the school didn’t have the resources to care for the children. These mothers have no breaks, but their commitment to their children is so inspiring.” said Jennie. “When I see that Fairtrade bananas can make their lives just a little bit easier, it makes me want to jump on the next flight home to sell more bananas and help right the wrongs of the banana industry.” 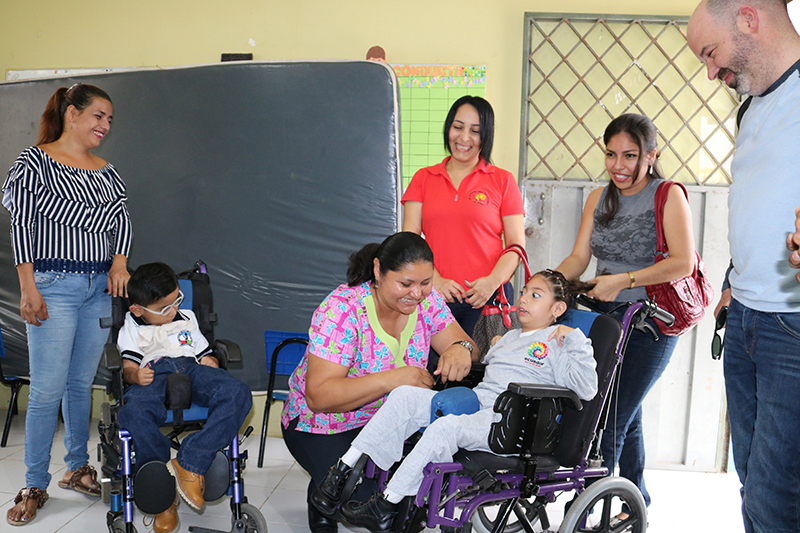 So, what can the consumer do?

Simple: begin by purchasing Fairtrade bananas. Other products you should prioritize purchasing Fairtrade include: coffee, cotton, sugar, and tea. Educate yourself on Fairtrade.ca about where your money is going and look for official Fairtrade certification when you shop. With more market demand, we can make a change!